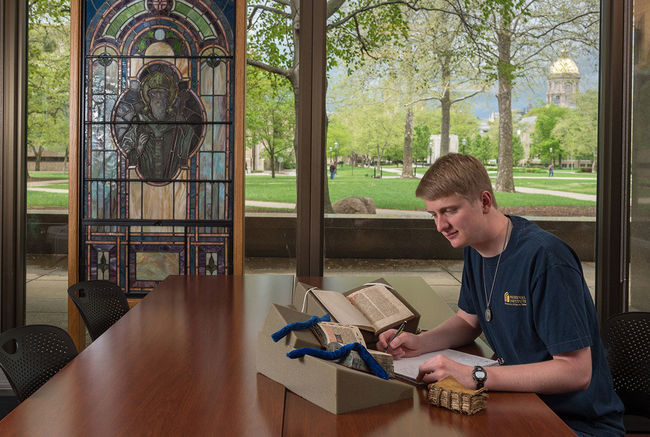 One visit to the Hesburgh Library’s medieval manuscripts collection, and Luke Donahue ’17 was hooked.

“I saw them and thought, ‘This is it.’ This is what I want to study,” Donahue said. “I was intrigued that there are all these manuscripts from the Middle Ages that no one has researched, and I was determined — I wanted to help fill that intellectual gap.”

Donahue paging through a manuscript.

That experience during his first-semester German class significantly shaped his Notre Dame education.

While he initially planned to study physics, Donahue decided to major in theology and German and add a minor in medieval studies. He studied abroad in Germany and received University funding to spend two more months there examining medieval manuscripts.

“If there’s something you’re interested in, explore it. Your faculty advisers can help you find ways to pursue any subject in depth,” he said. “Connecting with my professors for my research has given me greater insight into who I am and what I want to do.”

His academic interests culminated in an interdisciplinary senior thesis, in which he translated a set of medieval German prayers to Mary and investigated the life of the nuns who wrote them.

“That is exactly what Arts and Letters is — and should be — all about,” he said. “I think interdisciplinary connections are something we really benefit from. For me, that meant seeing how Western history and literary tradition have been shaped by theology.”

Donahue’s undergraduate research experience helped him learn field-specific skills in medieval paleography as well as broader skills that will continue to be valuable in the future.

“Research takes a lot of discipline, and I’ve really developed that,” he said. “It has also increased my critical thinking and taught me how to engage with texts on a broader, interdisciplinary level.”

After graduation, Donahue received a Fulbright research grant and a DAAD research grant, but declined both in order to enter the seminary for the Congregation of Holy Cross.

A member of the Glynn Family Honors Program, he participated in a Marian devotion group while on campus. He played tuba in the Notre Dame marching band and a hockey pep band. And he spent two summers participating in service programs, working with the homeless and providing spiritual education for children and teens.

Through it all, he saw Notre Dame’s Catholic identity as a common thread.

“My work is distinctly connected to and informed by my faith,” he said. “But anything you do at Notre Dame can be part of the Catholic mission and our commitment to Catholic social justice and education.”

A version of this story first appeared in the College of Arts and Letters viewbook.

“My work is distinctly connected to and informed by my faith. But anything you do at Notre Dame can be part of the Catholic mission and our commitment to Catholic social justice and education.”

Originally published by Carrie Gates at al.nd.edu on June 20, 2018.