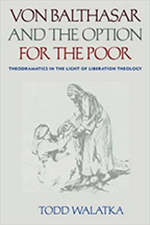 Hans Urs von Balthasar's vast corpus of theological, philosophical, literary, and pastoral writings remains one of the most impressive achievements in 20th century thought. In light of liberation theology and now the papacy of Francis, however, a theological affirmation of the option for the poor remains dangerously weak in Balthasar's corpus. Von Balthasar and the Option for the Poor offers a sympathetic reforming of Balthasar's account of the drama of salvation―what he calls "theodramatics"― in response to this weakness.

Balthasar argues that his theodramatics intends to do justice to human existence as personal, social, and political, but his regular inattention to God's concern for and solidarity with the oppressed undercuts his own intentions. Von Balthasar and the Option for the Poor strongly affirms Balthasar's most fundamental theological commitments, but then reimagines his theodramatics in light of a strong recognition of the option for the poor within divine revelation and oppression as a force within the drama of salvation.

The first half of the book offers a clear account of Balthasar's most fundamental philosophical and theological commitments as a foundation for developing a liberating theodramatics. The second half offers a creative reworking of Balthasar's Christology, anthropology, and ecclesiology in light of the work of Gustavo Gutiérrez, Oscar Romero, and Jon Sobrino as well as seldom engaged texts in Balthasar's corpus. In so doing, Von Balthasar and the Option for the Poor provides a rich and unmatched dialogical engagement between Balthasar and Latin American liberation theology―an engagement that brings greater consistency to Balthasar's thought, increased attentiveness to the shape of divine revelation, and greater responsiveness to the challenges facing the Church in the modern age. As a liberating theodramatics, Balthasar's theological vision is opened to and reformed by a robust affirmation of God's merciful partiality towards the poor and oppressed, the option for the poor as an essential dimension of the Christian life, and the recognition that oppressive structures are theodramatic realities that oppose God's gift of life.