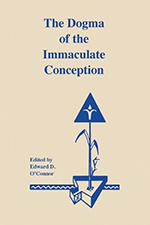 Thirteen European and American theologians treat the entire historical development and theological significance of a major Roman Catholic doctrine in The Dogma of the Immaculate Conception published (University of Notre Dame Press, 1958). Edward 0'Connor, C.S.C., has edited the 700-page volume which includes an exhaustive bibliography, a number of documents, and over fifty illustrations. A specialist in medieval theology, Father O'Connor notes in the preface that the subject of the Virgin Mary's Immaculate Conception was first discussed about the year 1100. The doctrine was defined by Pope Pius IX in 1854 after about 75 years of "what was perhaps the most prolonged and passionate debate that has ever been carried on in Catholic theology," O'Connor writes. The importance of any doctrine, however, he emphasizes, "does not lie chiefly in its history, but it its intrinsic significance as truth, and in its rank in the hierarchy of truth, which do not depend on historical contingencies." From this point of view, the Immaculate Conception is of immense importance, O'Connor observes, not only for Mariology, but also for the theology of the Redemption and of the Church. The Dogma of the Immaculate Conception is not merely a collection of miscellaneous essays on the subject. The various chapters deal with all the major aspects of the doctrine and range from "Scripture and the Immaculate Conception" to "The Immaculate Conception in Art."