NOTRE DAME, IN, March 24, 2017—Jennifer Newsome Martin, assistant professor in the Program of Liberal Studies with a concurrent appointment in the department of theology at the University of Notre Dame, wins the 2017 Manfred Lautenschlaeger Award for Theological Promise for her book Hans Urs von Balthasar and the Critical Appropriation of Russian Religious Thought.

The Manfred Lautenschlaeger Award for Theological Promise awards outstanding doctoral or first post-doctoral works which address the topic God and Spirituality (broadly understood). Every year, ten scholars are selected by an international committee of evaluators from eighteen countries.

Martin’s book has been widely reviewed. Theology Journal says, “Jennifer Newsome Martin’s timely, ambitious and novel approach is fundamentally useful in understanding the nature of Balthasar’s speculative and expansive theological approach, as well as offering insights into the influence of both Romantic and modern Russian religious thought upon his writings.”

The Journal of Jesuit Studies claims, “This subtle and sophisticated book is primarily a study of the theological method of Hans Urs von Balthasar, conducted in an unusual way. . . . [Her book] contributes significantly to a historical understanding of the creative interplay between Eastern Orthodox thought and the renewal of Western Catholic theology in the mid-twentieth century.” 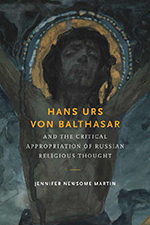