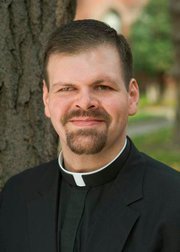 It is with great sadness that we report the death of Fr. Cody Unterseher, doctoral student in the Department of Theology, on April 25, 2012, in New York City.

Fr. Cody Unterseher, a priest of the Episcopal Diocese of North Dakota and a doctoral student in the Department of Theology since August of 2009, died on Wednesday, April 25, 2012 at 5:35 pm in New York City of complications from an aneurysm suffered on April 14.  He died with his parents and closest friends at his side. His friend, Fr. David Sibley, of the Diocese of Long Island, administered Last Rites and Viaticum.

Fr. Unterseher was ordained to the Diaconate at the School of Theology at Collegeville, MN on March 30, 2007 by Bishop Michael Smith and was ordained to the Priesthood on September 29, 2007 at St. George’s, Bismarck, also by Bishop Smith.   A doctoral student in the Liturgical Studies Area of the PhD program in theology, Fr. Unterseher had recently passed his candidacy exams and was preparing his dissertation proposal.

His funeral will be 10:30 am on Saturday April 28, 2012 at Christ Church, Bronxville, NY where he was Priest Associate and dearly beloved, in accordance with his expressed wishes. A complete obituary and more information will be forwarded to the Diocese and posted on the diocesan blog (http://episcopal-nd.blogspot.com) at a later date.

He will be greatly missed by all of us.

For a complete obituary and more information,  see http://episcopal-nd.blogspot.com/