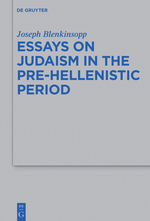 The essays deal with developments during the period from the liquidation of the Judean state to the conquests of Alexander the Great. This was a critical time in the Near East and the Mediterranean world in general. It marked the end of the great Semitic empires until the rise of Islam in the seventh century A.D.,decisive changes in religion, with appeal to a creator-deity in Deutero-Isaiah, Babylonian Marduk cult, and Zoroastrianism.For the survivors of the Babylonian conquest in a post-collapse society the issue of continuity, with different groups claiming continuity with the past and possession of the traditions, there developed a situation favourable to the emergence of sects. The most pressing question, however, was what to do faced with the overwhelming power of empire, first Babylonian, then Persian. Finally, with the extinction of the native dynasty and the entire apparatus of a nation-state, the temple became the focus and emblem of group identity.