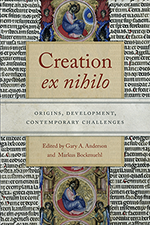 The phrase “creation ex nihilo” refers to the primarily Christian notion of God’s creation of everything from nothing. Creation ex nihilo: Origins, Development, Contemporary Challengespresents the findings of a joint research project at Oxford University and the University of Notre Dame in 2014–2015. The doctrine of creation ex nihilo has met with criticism and revisionary theories in recent years, from the worlds of science, theology, and philosophy. This volume concentrates on several key areas: the relationship of the doctrine to its purported biblical sources, how the doctrine emerged in the first several centuries of the Common Era, why the doctrine came under heavy criticism in the modern era, how some theologians have responded to the objections, and the relationship of the doctrine to claims of modern science, for example, the fundamental law of physics that matter cannot be created from nothing.

Although the Bible never expressly states that God made everything from nothing, various texts are taken to imply that the universe came into existence by divine command and was not assembled from preexisting matter or energy. The contributors to this volume approach this topic from a range of perspectives, from exposition to defense of the doctrine itself.

This is a unique and fascinating work whose aim is to present the reader with a compelling set of arguments for why the doctrine should remain central to the grammar of contemporary Christian theology. As such, the book will appeal to theologians as well as those interested in the relationship between theology and science.

“All the essays in this book are at the highest level of sophistication; they ask a lot of the reader, and assume engagement in and knowledge of Christian theology. Anyone who wants a conspectus of what’s in the Christian archive on this topic will turn to this collection.” — Paul J. Griffiths, Duke Divinity School

“The bible gives hints and pointers: the tradition then knows what it needs, compared with the awful alternatives. This volume shows how that works. From the Hebrew bible’s mysterious darkness to Philo’s transcendent God, through the quirky contribution of the Book of Revelation, the Church Fathers en passant produced grist for the scholastic mill that delivered the bread for modern day cosmologists to chew on. The course of God’s true love for creation—for the doctrine is about God as grasped by his people –– never did run smooth: the ‘story’ in all its stops and starts that is told in these chapters is arresting and stimulating. Highly scholarly and deeply imaginative.” — Mark W. Elliott, University of St. Andrews